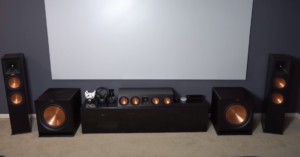 Having options is sometimes more of a curse than a blessing. Choosing between the good and the bad may not be hard, but choosing between good and good is a real headache. And the soundbar vs. surround sound battle is one of them.

Subscribers of these speaker types both claim that one is superior over the other, creating confusion for the newbies like us. What I did then was to critically compare which is better.

After rigorous reading during my toilet breaks, I realized one thing: there are three basic factors to consider to end the soundbar vs. surround sound debate.

But before I completely divulge these factors, I want you to open your mind, recall your math lessons, and be honest with your bank accounts. Also, I would like you to differentiate the two.

As TVs get thinner and thinner, the space for built-in speakers has become smaller over time. As a result, the sound that comes out of it is compromised. Hence, it has become a necessity to buy external speakers.

​Two of the most common external speakers used along with the TV are soundbars and surround sound system. In my previous article, I discussed what a soundbar is. It looks like a bar and is place either in front of or underneath the TV or on the wall.

​A soundbar usually has left, center and right speakers while some boast of 5.1 channel. This means that it may be a space-saving replacement for the surround sound system. However, skeptics question the soundbar’s ability to actually surpass the surround sound.

The surround sound system has at least five speakers and one subwoofer, hence the 5.1 labels. But newer formats have been introduced since I don’t know when increasing the number of speakers and subwoofers included in the package.​

Because of the number of speakers and subs involved and the individual enclosure each speaker and woofer comes in, the surround sound system can be placed all around the room. The result? A sound that literally surrounds you.

​Both are not for everyone.

Despite the strong points each of these speaker types presents their customers, not everyone can actually have them both. There are at least three factors that would hinder a person from choosing one type over the other.

​And if you are that person who cannot get both of these and you do not know which one to get, here are some guide questions for you.

​What do you need it for?

The first question you have to ask yourself: “ Why in the world am I buying either one of them? ” Of course, the obvious answer is you want a better sound system. But beyond that, what else will you use them for? Are you buying them for music, TV shows, or movies?

​“ What difference does that make? ” you ask. Well, quantity-wise, not much, but quality, a whole lot! You see, a surround sound system literally gives you that full-range surround sound you want, making you feel you are part of what you’re listening to.

For example, if you’re watching a movie and you see a car running, you can feel that you actually see the car speed down the road in real life. From the car approaching, to the roaring sound when it gets near you, to the fading hum as it gets further—all are “ real .”​

A soundbar, on the other hand, is definitely several notches higher than TV speakers but still doesn’t have a realistic surround sound effect. It’s probably because the box does not really surround you, per se.

​Not everything is for surround sound listening.

Going back to the purpose of buying speakers in the first place—music, TV shows, and movies, how is the quality of sound related to these three?

The answer is pretty straightforward: music and TV shows were not created for surround sound listening. Hence, if you are getting speakers for either of these two, then the soundbar should suffice for you. Otherwise, get the surround sound system.

​Where Will You Put It?

The next factor you have to consider is your place. Where in your house will you put it? How big is your allocated space? Do you have enough place for all five speakers plus a subwoofer? If yes, then go purchase that surrounds the sound system without looking back. Otherwise, it is the soundbar.

However, remember that surround sound system and apartments usually don’t mix. Aside from the fact that the space is limited in an apartment, there is also the risk of pissing your neighbors, thus getting that 1 in the morning knock and the occasional “ keep it down, will ya? ” In this case, it is the soundbar that’s your best ally.​

Another concern with the surround sound systems is the wiring. Sure your area can accommodate the speakers, but can it welcome all the wires? Take note that each component in the system is wired to the TV. The further you get, the longer the wire.

Sold? Wait, don’t buy the surround system yet. Using your math prowess, calculate the size of your room (again). The room size basically determines the power. The bigger the room, the higher power you’ll need. Fifty watts per channel for a small room should work fine.

How Much Money do You Have?​

Yes, whether you like it or not, your bank account controls which you can buy. You might be so sold on getting the surround sound system because you’re so into sci-fi and all movies with amazing sound effects that you’re willing to get the cheapest one you find.

Do not do it. Ever. It may be one of the worst decisions you’ll ever make. First, it may not sound as crisp as you expect. Second, it may break down earlier than anticipated. Last, it may come with cheap cables that will force you to replace them more often than wanted.

So go check your bank account and see how much it is willing to cough up for your audio system.

​To Wrap it Up

In sum, soundbar vs. surround sound which-is-better debate should not really exist. Getting either of them really depends on a number of things, such as your needs, space, and money. Both are good in their own ways, and both have pros and cons and at the same time.

Knowing what’s best for you simply means acknowledging the purpose you’re buying it and admitting the limitations your place and your wallet impose. Simple.

Like what you read? Tell us in the comments section or let your friends know. Share it!​

How To Write A Song? Complete Guide